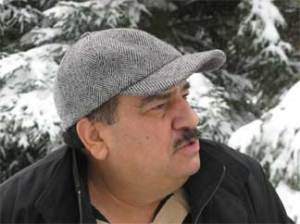 These following are excerpts of a synopsis prepared for the Azhar University in Gaza where Sabawi’s quadripartite novels “Land of Canaan” are now being taught as part of the recommended reading list.

Born in 1942 in the Toffah District of Gaza city to a poor family, Sabawi was cultured and educated from a very young age by his iconic learned father Sheik Hussien Sabawi. Sheik Hussien, a self taught man, ran a school from his home in Toffah where he taught children and adults alike. He was well versed on religion and he had an enlightened moderate approach to life. Sheik Hussien had in his library a variety of fiction and non-fiction books. He also had a rich collection of classical as well as contemporary poetry. The fourth novel Sabawi’s Quadripartite titled “The Fourth Impossibility” depicts a good characterization of his father in the character of “Mawlana”. Perhaps alos key to understanding Sabawi’s writing style is the treasure of folk stories available in his father’s library such as “Taghribat Ibin Hilal”, “Alzeer Salem”, “Anter Bin Shadad” “Alazhar Baibars” and many others.

Sabawi’s began his career in Gaza as a teacher in a public school; later he was assigned an editor of The Palestine News. In 1966 due to political turbulence and a rise in Sabawi’s sense of nationalism, he left his work and joined the Palestinian Liberation Army. The war of 1967 came as a surprise to his militia who have had no chance to receive proper training. Sabawi was forced to watch his city Gaza fall under Zionist occupation for the second time (the first was in 1956). He was now destined to join the fate of millions of Palestinians who were exiled. Sabawi spent a full year in a refugee camp in Amman before he headed to Saudi Arabia where he worked in various small jobs to feed his large family (his parents and five brothers who were left behind in Gaza and his own wife and children). By 1974 Sabawi started his own business and that gave him a chance to travel around the world. He finally settled in Melbourne Australia in 1980 along with this wife and 7 children. He wrote about his experience of immigrating to Australia in his novel “The land of Waga Waga”.

At 40 years of age Sabawi dedicated much of his time to write the first of his “Land of Canaan” series “The Phoenix”. Published by Papyrus Publishing in Melbourne Australia, “The Phoenix” won the International Gibran Award. The Department of Culture and the Arts in Australia sponsored its translation into English. This was the beginning of a series of publications by Sabawi, which were translated into English. By 60 years of age, Sabawi had completed the last of his quadripartite novels “The Fourth Impossibility”. Each one of the four novels he had written was a result of five years of labor. All four combined are now a national treasure, covering 200 years of Palestinian history.

Sabawi returned to his home city Gaza with the promise of peace that the Oslo process offered. There he built “AlNawras” a cultural hub and resort on land he owned with his family on the Northern shores of Gaza. “AlNawras” has an Opera House large for 700 guests, conference rooms, music hall, Olympic size pool and a publishing house, which was dedicated to publishing Sabawi’s work. Through this project Sabawi wanted to give the Palestinian people of Gaza a more humane environment to help them strengthen their resolve and their steadfastness.

In a conference held in Jerusalem for Palestinian Authors in 2000 Abdul Karim Sabawi was asked why he took so long to complete his work – a total of 20 years to write the four parts of the “Land of Canaan” series. His response was “Not at all, I feel the time was barely enough. Being committed to deliver an honest and real reflection of the history meant I had to take the time to check tens of references for each period I covered. I felt responsible for ensuring the integrity of all the details that surrounded the lives of historic characters?” During that same conference, Sabawi was asked how much of his novel content was fiction and how much of it was based on real events. He replied “I didn’t need to rely on my imagination…the reality of our nation is far more tragic and horrifying than any fiction can be.”

Artistic Influences: Sabawi was raised during the period of Arab Nationalism that preceded the establishment of the organized Palestinian fictions and militias. The Arab masses woke up from the devastation of the catastrophe, the Nakbah to the sound of the drums of revolutions in Egypt, North Africa and the Eastern Nations. The calls for independence elsewhere echoed the voices calling for a non-negotiable Free Palestine. Palestinian nationalism crystallized to the point of romanticism but for Sabawi it became even more than that. It reached the point of narcissistic hysteria. He became entirely inhabited by his people’s cause.

The nationalist fever at the time was accompanied by Massive cultural renaissance with so many of the world’s classic novels translated into Arabic giving Sabawi the opportunity to be acquainted with the best of the Western world’s authors: Hugo, Deakin, Tolstoy, Sholokhov, Gorky and whatever else was available from the modern era such as Hemingway, Kazantzakis and Erskine Caldwell. He also explored the works of existentialists such as Sartre, Simon Du Bois, Albert Kamo and Alberto Moravia amongst many others. The Palestine News newspaper where he worked in 1960 was like a lighthouse for nationalist progressive views and a haven where poets and writers could meet. The editor of that paper was the great Palestinian intellect Zuhair ElRayes, one of that generation’s leaders. It was there that Sabawi met with his life long friend the wonderful poet and writer Nahedh ElRayes. Also Sabawi had the privilege of meeting with the great poet Yousef AlKatib, the writer Mohamad AlRadwan, the left leaning poet Moeen Bississo, the novelist and inspirational Palestinian Leader Ghassan Kanafany who was martyred years later and many many others. It was in that environment that Sabawi’s intellectual curiosity peaked and his cultural ability and creativity were nurtured. On the pages of the Palestine News Sabawi published his early works in poetry and short stories before the Occupying forces uprooted him and spewed him out into the unknown.

Why he wrote the Land of Canaan’s Quadripartite? After the 1967 war, Sabawi became part of the Palestinian Diaspora. There he was dismayed to see the new generations born in exile losing touch with the history, culture and geography of Palestine in spite of their desire to learn about their roots. This was especially significant because most of what was written in Palestinian novels and short stories as well as in Arabic Literature relating to Palestine was focused on the period post Al-Nakbah, as if Palestine did not exist before that time and as if the Palestinian people who have had the privilege of living on that land were not there prior to the Catastrophe of 1948. Maybe this explains Sabawi’s great care to document the daily details of life in the cities and in the Palestinian villages prior to 1948. He created vivid imagery of the Palestinian farmers, laborers, craftsmen, and workers. He documented the traditions, the culture the wedding the funerals the food the embroidery and everything that was even remotely part of the daily lives of Palestinians and their folklore.

The question to ask here is how relevant is the Sabawi Quadripartite “Land of Canaan” to all Palestinians not just in Diaspora? Sabawi would say that his books are as needed on the inside of Palestine as they are for those on the outside. The Israeli tanks continue to destroy Palestinian homes, their land, their olive trees, their fruit groves but more especially their heritage sites and their history. The Zionist invaders have changed the names of their cities, their streets and their fields. They uprooted the civilian population and confined them to Cantons and isolated areas under siege and in refugee camps right under the world’s nose. Zionism has targeted the Palestinian collective memory in the same way they have targeted the Palestinian land. Sabawi’s Quadripartite works against the Israeli bulldozers as they try to destroy and burry in their trail of destruction the features of the Palestinian identity. Through his novels “Land of Canaan” Sabawi has chosen to become a guard to the collective memory of his people.

Significant Features of “Land of Canaan” Even though Sabawi enjoys reading and learning from Western style literature, it has had no impact on his own work, his writing reflects the style of traditional Arab folk tales and the art of story telling. He is inspired by the way the poem, the song, the “Mawaal” harmonize together along the dramatic story line going through the various ups and downs in a plot like a symphony. In his books he evoked this ancient art of story telling, which is closer to a cinematic plot. Its characterized by the short well articulated and direct expressions, the enlightening dialogues, songs, poetry and the vast array of popular proverbs and sages that add to the story line without being a distraction. Sabawi’s books take the readers on a journey that alternates between hysteric laughter, cozy comfort and heartbreaking tragedy. This is the way of story telling as perfected by Sabawi. His words jump out of the pages so vivid, captivating and compelling taking the readers along a path of reflection and meditation with thought provoking g insights that find their way to the mind with ease.

Because Palestinians believe that sometimes humor is the only way to relate to tragedy, Sabawi’s delightful and humorous spirit refuses to take away laughter from the readers even in the most bleak of circumstances. Although Sabawi’s work is specifically dedicated to Palestinian culture and history, his stories appeal to a larger audience. His understanding of the oneness of the human spirit, our desires, our aspirations and hopes reflect in his works of art sheds the light on the commonality of our humane experience. This is perhaps one of the strongest points when talking about Sabawi’s Quadripartite “The land of Canaan”.

Sabawi has filled a need in Palestinian and Arab literature. While critics have said “The Russian farmer did not exist before Tolstoy” one can argue that two hundred years of Palestinian history were not acknowledged before Sabawi’s “Land of Canaan”. If great Art is an ever lasting attempt to cease and frame a moment in time, Sabawi has succeeded in ceasing and framing the Palestinian era prior to the Zionist invasion, documenting that point in time that our people yearn for before the Catastrophe “Al-Nakbah” of 1948.